70210 CHI Vardy is a Legends of Chima set released in 2014. It contains a constraction model of Vardy. 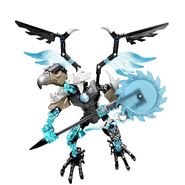