70227 King Crominus' Rescue is a Legends of Chima set released in 2015. It includes 6 minifigures, one of which is exclusive to this set. 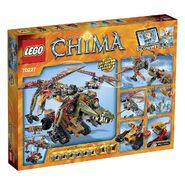 Saving Laval in the TV series

King Crominus' Rescue art
Add a photo to this gallery