70321 General Magmar's Siege Machine of Doom is a Nexo Knights set released in the summer of 2016. It includes Clay, General Magmar, and Flama.

This monstrous machine features a tower for where General Magmar can sit on and Flama is standing on guard near the mouth piece. This 2-in-1 convertible vehicle can easily convert from a large and menacing tower to siege vehicle with six wheels, a leaver on the back must be pulled in order to convert the vehicle. For defense you can hold down to this springy piece in the mouth to let it shoot out disks from the disk launcher. To activate the catapult simply put the piece in the catapult on the siege machine and hit your finger on the end of the catapult to shoot out the Globlins at the knights. If you manage to capture the knights then there is a jail at the back of this machine which has just enough room for one minifigure to fit in.

Tower over the enemy with the monstrous Siege Machine of Doom!

General Magmar is seeking the Book of Destruction to help Jestro create even more chaos in the realm of Knighton. Charge Clay Moorington into battle on his Hover Horse to stop him, and dodge the flying Globlins. Zoom in to attack General Magmar and Flama, but watch out when the fearsome 2-in-1 machine rises off the ground and turns into a monstrous siege tower! Includes scannable shields for 3 NEXO Powers: Giant Growth, Storm Dragon and Dynamighty. 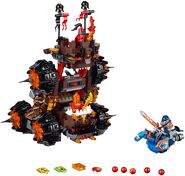 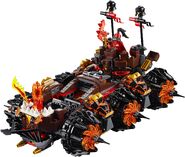 Battering ram form
Add a photo to this gallery