The set includes a giant mech for the Nexo Knights. Its left arm is a shield with two stud shooters. Its right arm is a giant sword. The lava monster gets a stud-shooting crossbow. Also included is a shield.

Power up King Halbert in the King’s Mech fighting machine!

Defend the castle and wait for reinforcements! Jestro and his army of Lava monsters are making a final push against the King’s Castle—but they weren’t expecting this! Tech whizz-kid Robin Underwood has built a mighty robotic suit of armor for King Halbert to defend the people of Knighton. Swing the giant sword or launch the flying shield with trusty King’s bot at the controls. Includes 2 scannable shields for NEXO Powers Storm Dragon and Backfire. 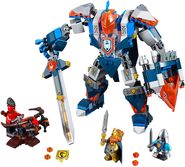