Brickipedia
Register
Don't have an account?
Sign In
Advertisement
in: Class 4 articles, Sets listed for ages 6-12, Castle (2013),
and 3 more
English

This set contains the Dragon Knights' small fortress, the Wizard's Dragon, the King's Knights' Catapult, a treasure chest, and five minifigures: Dragon Wizard with a staff, a Dragon Soldier with a sword and a shield, a fully armored King's Knight with a sword and a shield, a King's Knight with a spear, and the Princess. A red Dragon is also included, the first dragon made out of exclusive parts since Castle (2007). This set also contains a frog, rat, and an orange brick separator.

The dragon included seems to be a 2.5 dragon, like those included in Castle (2007). It has red and black colouring, and fang pieces are put in the holes on the back of its head. 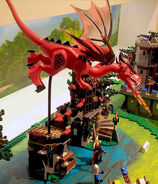