Brickipedia
Register
Don't have an account?
Sign In
Advertisement
in: Class 2 articles, Sets listed for ages 6–14, 2011 sets,
and 3 more
English

There are 42 pieces included in this set. Nine of these pieces make up the minifigures, which are the ADU Pilot with an ADU blaster, and an Alien Trooper. The remaining pieces are used to build the alien striker which is a small aircraft belonging to the Aliens. The Alien Striker has neon green, dark grey, purple, and black building pieces in the main build. Other pieces are transparent neon green lasers at the front, transparent blue cones at the back for engines, red and black levers, and curved pieces using SNOT across the sides.[1] 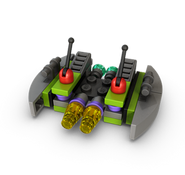 Computer Generated image of the striker

x12px $9.99 +
Released
May 2011 +
ShopDescription
Stop the alien invader!
The a … Stop the alien invader!<br /> The alien defense unit soldier is on the look out for an alien invader speeding around the city. Stop the outer space bully from capturing anything he can get his suckers on! Dodge the striker’s laser guns and send the bug eyed invader back to where he came from! *Includes 2 minifigures: alien defense unit soldier and alien trooper*Alien Striker measures over 2” (5cm) wide*Alien Striker measures over 2” (5cm) wide +
Theme
Space +
Title
Alien Striker +
Txt1
ADU Pilot +
Txt2
Alien Trooper +
Type
Set +
USPrice
$4.99 +