Kai's Fire Mech is mainly golden and red. The body has an upright open cockpit from which Kai pilots the robot, and there is a black handlebar he uses to steer the robot. The handlebar is connected to a gold robot arm extending from below the cockpit. Higher up on the robot's body are its "shoulders", which use red sloped bricks to emphasize their bulkiness. These sloped bricks also have flame decals stickered on them. At the top of the body and in the centre is a black element from which two small golden robot arms extend up, displaying one gold katana each at their ends. The robot's arms and legs implement Hero Factory elements (black joints covered with red armour) for poseability. Attached to each piece of armour is a golden serrated blade. At the end of each leg is a brick-built foot implementing red sloped elements, with some small gold slopes for the "toes". At the end of the robot's right arm is a brick-built appendage with several translucent-red cones at the end acting as cannons. At the end of the left arm is a brick-built hand using four, gold robot arms as fingers. Three of these fingers are attached to one side of the hand, and the last one is attached to the top in order to give it the appearance of a thumb. The robot holds the Elemental Blade of Fire in it's hand.

The Fire Mech appears in "Island of Darkness", the 23rd episode of Ninjago: Masters of Spinjitzu. In the episode, it is one of the machines engineered by Dr. Julien and Nya in order to be used against the Stone Army. It is packed into Cole's Power Drill in box-form, and later transforms into robot-form when Kai needs it to fend off the overwhelming Stone Warriors surrounding the group. Kai then continues to use the robot to fight the Stone Warriors and assist the group in reaching the Temple of Light, using it to climb the rocky surface of the cliff. Later, in "Rise of the Spinjitzu Master" it is again used by the ninja to reach the Temple of Light for the second time to find the First Spinjitzu Master's Golden Mech. However, it is never used again by Kai. 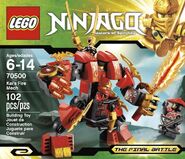 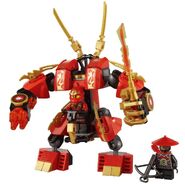 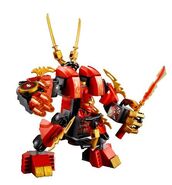 Concept art of the Mech for the Ninjago: Masters of Spinjitzu cartoon
Add a photo to this gallery

Retrieved from "https://brickipedia.fandom.com/wiki/70500_Kai%27s_Fire_Mech?oldid=1955772"
Community content is available under CC-BY-SA unless otherwise noted.