70501 Warrior Bike is a Ninjago set released in 2013. It contains two minifigures, Jay and a Warrior.

The Stone Warrior's vehicle is shaped like the head of a Samurai set at a nearly horizontal angle. The cockpit is surrounded by round silver pieces, making the domed top of a helmet. In front of that, two red pieces curve outward from the centre, representing the piece commonly used by the Stone Army in their helmets for decoration. Angled black pieces over light green bricks give the effect of slanted green eyes and an angry expression. In front of that are two red spike pieces depicting fangs above a stretch of black. protruding outward from this is a long red tread that gives the effect of a tongue. Two curved spikes are located on the sides, near its tip.
The vehicle has three wheels. Two large black ones in the back and one small grey one inside the tread at the front. Three flick-fire missiles are also included, these at the cockpit area where the Stone Soldier can launch them.

Jay's jetpack is black and blue with gold lining. It has two golden katana set at a downward angle on either side. A pair of conical pieces make the thrusters.

When Lord Garmadon came to the Dark Island and joined forced with the Overlord, he began constructing his ultimate weapon. But when the four ninja were discovered to have found the island as well, he ordered the creation of several patrol and attack vehicles to keep them from interfering. These vehicles were used extensively in pursuing the ninja across the island. 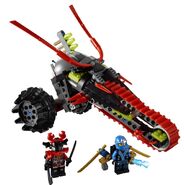 Concept art for the Ninjago: Masters of Spinjitzu cartoon
Add a photo to this gallery