When Lord Garmadon first met the Overlord, the latter promised him an undefeatable weapon of colossal power. The Stone Army began mining Dark Matter for the weapon's construction; later, the Overlord stated that when the Celestial Clock completed its countdown, the ultimate weapon would be complete.

In Return of the Overlord, the Garmatron is finally completed, and Lord Garmadon pilots it to the coast of the Island of Darkness. From there, he uses the Garmatron's cannon to launch Dark Matter missiles at Ninjago, infecting parts of the land with darkness. After a few shots, the balance between light and darkness in the world is upset, allowing the Overlord to re-take a physical form using Garmadon's body.

In order to increase his power further, the Overlord aims the Garmatron's next projectile at Ninjago City, but the Ninja attack the Stone Army to prevent them from loading another Dark Matter missile. General Kozu attempts to stop them, but Sensei Wu kicks him into the Garmatron's loading bay, causing the Overlord to mistakenly fire his subordinate into Ninjago City. After a fight with Lloyd, the Overlord decides to attack Ninjago City directly, opening a portal and leaving with the Stone Army and an infected Nya.

During Rise of the Spinjitzu Master, the Garmatron appeared in the middle of Ninjago City, where it began firing Dark Matter all over the place with its side-mounted turrets. The influx of evil further empowered the Overlord, allowing him to regain his true form. In this state, the Overlord transformed the Garmatron into a massive fortress from which to oversee his new kingdom.

When the Ninja returned to Ninjago City, the Ultra Dragon drew the Stone Army's attention long enough for Lloyd to breach the outer wall of the fortress with the Golden Mech. Before further damage could be done, the mech was destroyed by Nya, manning a turret on the outer staircase of the tower. After the Stone Army fell under the control of Dareth, the forces of light ascended the tower, although the interference of the remaining villains left only Lloyd to reach the top.

After an epic battle with the Overlord, Lloyd unlocked his true potential as the Ultimate Spinjitzu Master, allowing him to defeat his dark nemesis. When the Overlord was destroyed, the fortress that was once Garmatron disappeared as well, leaving only a blasted crater where it once stood.

The Garmatron is massive and powerful, able to crush or push aside anything in its path - despite this, it can also move fairly quickly for its size. Its armaments include movable spikes between its treads, and cylindrical turrets on either side of its hull that can fire regular energy blasts or Dark Matter rounds. Its primary weapon is the massive cannon on its front, which can fire projectiles clear across the Endless Ocean. Its usual ammunition is a large missile with a Dark Matter warhead, allowing it to infect large portions of land with pure evil energy. The cockpit - located at the top of the machine - features a lever-activated trapdoor in the middle of the floor, allowing the pilot to drop enemies into a shaft which shoots them through a door, and out through the back of the Garmatron.

Although the Garmatron has not displayed any structural weaknesses, its weaponry has a few exploitable flaws. Its side turrets can be commandeered by enemies (as Kai did) and turned against the Overlord's own forces, also its main cannon has a twenty-second warmup period before it can fire it's first shot, and its Dark Matter ammunition must be loaded manually into a port on its side. 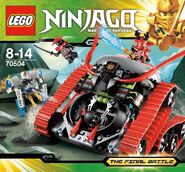 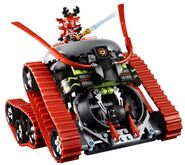 Concept Art of the Garmatron for the Ninjago: Masters of Spinjitzu cartoon 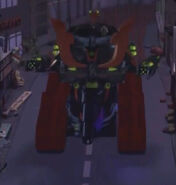 Garmatron as seen in the TV series, piloted by the metamorphosing Overlord