Brickipedia
Register
Don't have an account?
Sign In
Advertisement
in: Class 3 articles, Sets listed for ages 8-14, Ninjago,
and 4 more
English

Both the Temple and the mech featured prominently in The Dark Island Trilogy, in which Clouse attempted to corrupt the temple with Dark Matter in order to force the Dark Island and Ninjago Island to fuse together again so that he could rule both in darkness. To stop him, Sensei Wu employed the Golden Mech, which he had given to Cyrus Borg to repair. Clouse created a Shadow Mech of his own from shadow warriors who had been fighting the Ninja alongside Nadakhan's former crew, whom Clouse had recruited to his service. However, the Golden Mech proved victorious, and was able to restore the Temple of Light to its former glory. 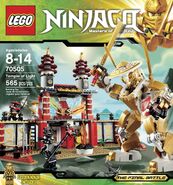 Inside of the temple

Concept art of the Golden Mech for the Ninjago: Masters of Spinjitzu cartoon