70591 Kryptarium Breakout is a Ninjago set released in August 2016.

Kryptarium Prison is a jail in Ninjago for the worst villains. It was featured in LEGO Ninjago: Shadow of Ronin as well as the fourth season. 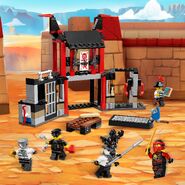 The set in it's entirety
Add a photo to this gallery

Retrieved from "https://brickipedia.fandom.com/wiki/70591_Kryptarium_Prison_Breakout?oldid=1979313"
Community content is available under CC-BY-SA unless otherwise noted.