Brickipedia
Register
Don't have an account?
Sign In
Advertisement
in: Class 3 articles, Sets listed for ages 8-14, Pages that link to Legopedia (Russian),
and 4 more
English

70594 The Lighthouse Siege is a set released in the August 2016 Ninjago "Day of the Departed" wave.

The Lighthouse Prison first appears in The Last Voyage, where the Destiny's Bounty reaches it on its way to Dark Island. Finding the lighthouse, the Ninja, Nya, Misako, and Sensei Wu knock on the door. To their astonishment, they are greeted by Dr. Julien, Zane's father whom he last remembered seeing on his death bed. As Dr. Julien explains, Samukai revived him using an elixir, but then imprisoned him at the lighthouse when he refused to provide weapons and vehicles for the Skulkin.

In order to prevent Julien's escape, Samukai also chained a Leviathan in the waters near the island, and the Ninja are forced to hide their presence from it. With Dr. Julien's help, the group is able to get the Bounty airborne again, though the Leviathan attempts to prevent their escape. However, Zane is able to secure their release by freeing the Levithan, collecting Starteeth to eat through its chains. With both prisoners freed, the Bounty makes its way towards Dark Island.

Later, during The Last Resort, Nya and Jay use the Lighthouse Prison as a safehouse to hide from Nadakhan, and discover Tai-D and Echo Zane haunting it. After Nadakhan forces Clancee to make a wish enabling him to discover their location, the two Ninja and the pair of robots work to fortify the lighthouse. Nadakhan's Sky Pirates soon arrive for a massive assault, and despite the defenders' best efforts it is overrun. Nya thus uses the last of their Traveler's Tea to open a portal so Jay can escape. In Operation Land Ho!, Jay returns to the island in order to collect Echo Zane to join his motley team of allies.

In "Farewell the Sea", Jay is revealed to have taken up residence at the lighthouse in the year since Nya merged with the sea, apparently feeling a closeness to her there. Cole, Kai, and Zane approach him to rejoin the team, but he initially refuses, feeling that everyone has forgotten Nya. A fleet of memorial lanterns demonstrates that this is not, in fact, the case, and after Lloyd arrives as well the Ninja decided to reunite in memory of Nya. In "The Call of Home", Nya travels to the lighthouse after her memories are jogged, but finds the lighthouse empty and is forced to return to the sea as her form begins to break down. 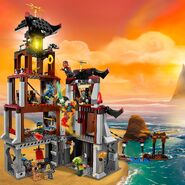 $99.99 +
Released
2016 +
ShopDescription
Jay and Nya are seeking refuge in the ligh … Jay and Nya are seeking refuge in the lighthouse and are setting up loads of traps ready for an attack by the sky pirates. Dodge the rapid-fire shots from the pirates' jet. Activate the entrance steps' trap function to send invaders tumbling straight into the prison below. Show your ninja parkour skills to climb up and down the walls or slide down the pipe into combat with the enemy. Tip dynamite on the sky pirates, battle Nadakhan for the Djinn Blade and claim victory!</br></br>*Includes 7 minifigures: Nya and Jay in Skybound outfits, Echo Zane, Battle Clancee, Nadakhan, Battle Flintlocke, Sqiffy, plus Tai-D robot.</br>*The set includes a multi-story lighthouse and sky pirates' jet.</br>*The lighthouse opens out for easy play and includes entrance steps with trap function, a hidden basement laboratory (with a lab table) and a prison, a collapsing floor function, hidden spring-loaded shooter, 2 stud-shooting crossbows, 4 golden swords, golden sai, ninja wall elements, a pipefor minifigures to slide down to attack or escape, a crank-operated function for dropping dynamite elements, plus a glowing light brick function at the top of the tower.</br>*Press down on the golden weathervane at the top of the lighthouse to make the light brick glow.</br>*Activate the front steps' trap function to make invaders fall straight into the basement prison.</br>*Climb or descend the wall elements with the ninja minifigures in true ninja style.</br>*Also includes a jetty with a string of lante rn-style elements, plus a mailbox and a rock element with a hidden sword.</br>*The sky pirates' jet features a 6-stud rapid shooter, 2 detachable sky pirate swords and a translucent flame exhaust element.</br>*Weapons include Nya's 2 golden swords, Jay's Golden Scythe, Nadakhan's Djinn Blade, Battle Flintlocke's 2 guns, Battle Clancee's fang broom and the sky pirates' stud shooter.</br>*Accessory elements include the Teapot of Tyrahn, dynamite, syringe, wrench, drill, magnifying glass, oil kettleand a stove.</br>*Recreate and role-play epic scenes from the NINJAGO™: Masters of Spinjitzu TV show.</br>*This set offers an age-appropriate building experience for ages 8-14.</br>*The lighthouse (including jetty) measures over 14” (36cm) high, 9” (25cm) wide and 12” (32cm) deep.</br>*Sky pirates' jet measures over 1” (5cm) high, 5” (13cm) long and 3” (8cm) wide.m) high, 5” (13cm) long and 3” (8cm) wide.
Theme
Ninjago +
Title
The Lighthouse Siege +
Txt1
Jay +
Txt2
Nya +
Txt3
Nadakhan +
Txt4
Echo Zane +
Txt5
Tai-D robot +
Txt6
Clancee +
Txt7
Flintlocke +
Txt8
Sqiffy +
Type
Set +
USPrice
$69.99 +
Advertisement