The Samurai X Cave was first introduced in the third season of Ninjago: Masters of Spinjitzu, being introduced as a lair from which Nya operated as Samurai X and where she kept much of her equipment from that time. Sensei Garmadon and Lloyd would travel here in search of a vehicle to aid their escape from the forces of the Overlord. It would later be invaded on two separate occasions: once by Morro and his Ghost Warriors as they sought a means to acquire the Sword of Sanctuary, and later by the Vermillion in search of metal. The latter occasion would take place after Nya brought Zane their in an effort to repair him, and saw the theft of her Samurai X armor just as the Ghosts' intrusion had resulted in the loss of her exo-suit. It was later invaded again by the Vermillion, and the new Samurai X took Nya's armor and mech from here before being confronted by Nya. 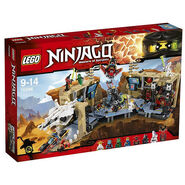 The front of the box.