The set comes with Kai, Nya and Sqiffy. Kai is on a bike similar to his bike in the first season, and Nya has a bike with flick missiles and sword guards on each side. Sqiffy has a hang glider, which is mostly orange. 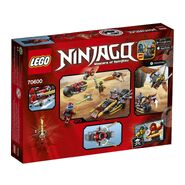 The set in its entirety
Add a photo to this gallery
Retrieved from "https://brickipedia.fandom.com/wiki/70600_Ninja_Bike_Chase?oldid=1821817"
Community content is available under CC-BY-SA unless otherwise noted.