Brickipedia
Register
Don't have an account?
Sign In
Advertisement
in: Class 3 articles, Sets listed for ages 9-14, Articles that use content from other websites,
and 5 more
English

Misfortune's Keep was the most infamous pirate ship to sail the seas of Ninjago, serving as the vessel of Nadakhan and his Sky Pirates until they were defeated by Captain Soto and the crew of the Destiny's Bounty. After being freed by Clouse, Nadakhan rescued his crew and celebrated with them aboard the Keep, which had ended up in a hidden cove. After witnessing the destruction of Djinnjago, Nadakhan became determined to take revenge on Ninjago and set his crew to work refitting Misfortune's Keep into an airship. This would then serve as their base of operations as they menaced Ninjago while attempting to create a brand new Djinnjago by lifting various landmasses into the sky.

In The Dark Island Trilogy, which takes place after Nadakhan's escape and its results were (mostly) negated by Jay's third wish, the Keep is once again converted into an airship after Clouse assumes control of the Sky Pirates. It then serves as Clouse's base as he attempts to corrupt the Temple of Light so that he can rule both Ninjago and the Dark Island. 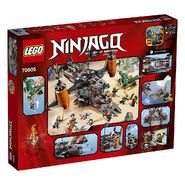