70615 Fire Mech is a The LEGO Ninjago Movie set released in 2017 that includes several minifigures, including Kai, Zane, two of Garmadon's henchmen, and two civilians. 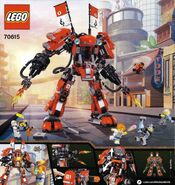