Brickipedia
Register
Don't have an account?
Sign In
Advertisement
in: Class 2 articles, Sets listed for ages 9-14, The LEGO Ninjago Movie,
and 4 more
English

70618 Destiny's Bounty is a The LEGO Ninjago Movie set released in 2017 that includes several minifigures, including Master Wu and all of the ninja.

The set includes the Destiny's Bounty with a few weapons and accessories, like former Garmadon's helmet or an Serpentine helmet. The back of the ship contains a cab, that contains different rooms, like a bathroom, a bedroom or a training room. The front of the ship features two dragons that are the prow of the boat. The ship has also three sails and they have a dragon on it.

The Destiny's Bounty 2.0 appears upgraded to this design in "The Jade Princess", or else has had its appearance altered like those of the Ninja due to time travel. It is first seen at the docks of Ninjago City, where it seems to have been unused for some time. Lloyd flees here with Harumi to escape from the Sons of Garmadon under Ultra Violet, and is able to do so by getting the ship airborne. They later pick up the other Ninja and welcome Harumi into their group.

The ship was later attacked by Garmadon's Colossi and badly damaged, later crashing in the First Realm after the Ninja used Traveler's Tea to escape. Components from the ship would be salvaged to build Kai's Destiny's Wing aircraft. It was later apparently either retrieved or an identical ship constructed, as the Ninja utilized the craft in their conflict with the Oni. 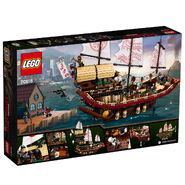 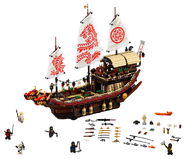 The set in its entirety (which does not show Lloyd's minifigure). 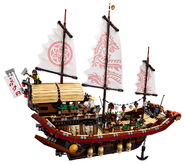 The back of the ship. 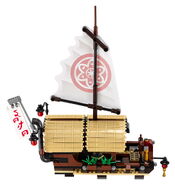 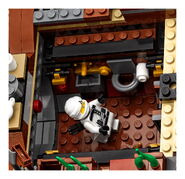 The front of the ship.