Brickipedia
Register
Don't have an account?
Sign In
Advertisement
in: Class 3 articles, Articles in need of expansion, Sets listed for ages 12+,
and 3 more
English

In March of the Oni, Zane and Cole (joined by P.I.X.A.L.) travel to the docks, where they are presented with a new Destiny's Bounty by the Ninjago City Police Commissioner.

In "Unsinkable", P.I.X.A.L. leads the Ninja to the docks to unveil the new Hydro Bounty, which later sets out from the docks in the direction of the Tartarus Trench. In "Master of the Sea", Kalmaar arrives at the docks after acquiring the Storm Amulet, only for Wu, Cole, Kai, Ray, and Misako to arrive and confront him. After a brief confrontation, Kalmaar and his Maaray Guards capture their adversaries and prepare to dump them into the sea tied to an anchor. Fortunately, the crew of the Hydro Bounty arrives just in time to rescue their comrades, though Kalmaar still manages to escape with the Storm Amulet. In "The Calm Before the Storm", Gayle Gossip reports on strange weather at the docks just before Kalmaar arrives riding Wojira. 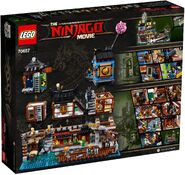 The Joker's hair can be seen