Brickipedia
Register
Don't have an account?
Sign In
Advertisement
in: Class 3 articles, Articles in need of expansion, Sets listed for ages 9+,
and 3 more
English

The monastery is located high above Ninjago on top of the Mountain of Impossible Hieghts. It was originally where the First Spinjitzu Master once lived. Later, Sensei Wu lived there and trained his ninja. The monastery had a training course that can be activated once pressing a button located inside a dragon statue. It was later destroyed by the Hypnobrai when they reclaimed their tribal staff, and the ruins were left desolate for some time.

The Monastery once hosted a celebration of the defeat of the Serpentine by the Elemental Masters, though it also served as the site of their final battle with the traitors Acronix and Krux. After Garmadon and Wu stole their powers with the Time Blades, the blades were thrown into a time vortex above the monastery, with the Time Twins swiftly following. Forty years later, Acronix returned to the ruins of the monastery, and briefly battled Wu and the Ninja there. When he and Krux traveled back in time with the Iron Doom, they and their Vermillion attacked the Monastery and the Elemental Masters. After being thwarted by their old allies-with help from Kai and Nya-the pair attempted to travel into the future.

After the defeat of the Sons of Garmadon and the Colossi, the Monastery was rebuilt and once again became home to the Ninja. The courtyard wall was decorated with murals depicting the various foes they had faced and defeated. The Omega later led his army of Oni to the monastery to attack it, and the Ninja and their allies fought them on the heights leading to the monastery. Eventually, they achieved victory by performing a joint Tornado of Creation, which caused the Oni army to vanish.

The Ninja were later subjected to grueling exercises in the monastery after sixth months of laying about, with a fed up Wu setting traps and unleashing an electrically powered chicken against them. Later, he and P.I.X.A.L. revealed to the Ninja that they had built a secret hangar in the mountain beneath which contained a number of new vehicles. Antonia and Lil' Nelson later made their way here to alert Wu to the peril the Ninja had gotten into in Aspheera's tomb. Kai, Jay, and Cole returned to the monastery to warn him of Aspheera, and learned that he was responsible for her imprisonment. The Ninja later had a final battle with Aspheera in the vehicle hangar, from which the Ninja also departed for the Never-Realm. 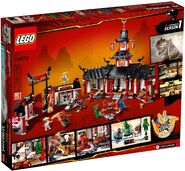 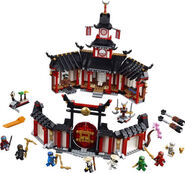 The inside of the monastery