The set is mainly focused on the "Space Swarmer" taking on a Blue Team Galaxy Squad robot, who is armed with a large blaster, using a camera piece with two red studs on one side, two connector pegs with nobs on both sides of the gun, which support 2-stud long TECHNIC beam, as the end of the gun. The robot also has a jet-pack, made with two space guns, which originated in Alien Conquest. The back of the jet-pack is where an antenna is positioned.

The Space Swarmer is made of predominately dark red on the inside of the ship, and lime green on the outside. On both sides of the swarmer is a transparent green wing piece, with an alien sonic gun just behind it on the left of the ship. There are four legs at the bottom of the ship to hold it up, with claw like feet. The cockpit supports room for one minifigure, the Alien Buggoid, with a control panel, which is printed with a silhouette of 70701 Swarm Interceptor, a print which is common for most of the alien vehicles to have. The cockpit screen is a dark red transparent piece, which is also very common in the theme, and is able to be opened up. The front of the Space Swarmer is a grabber mouth, with three robot arms as mandibles to hold a victim in. A 2x2 round tile is printed with a mouth, to decorate the set.

The Space Swarmer model contains 67 pieces. The rest of the set contains 19 pieces.

The Space Swarmers were vehicles that fought for the bugs during the War for the Planet Selva Galaxy. They appeared in many battles, but eventually, they were destroyed or forced to retreat. 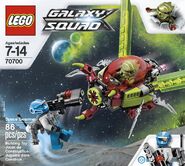 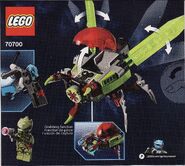 x12px $17.99 +
Released
Late 2012 (Canada and US)
March 2013 (Australia) +
ShopDescription
Zap the alien buggoid before he nabs th … Zap the alien buggoid before he nabs the Galaxy Squad's robot!</br></br>The evil alien buggoid is buzzing around in his Space Swarmer. Don't let him capture the Galaxy Squad robot sidekick with the ship’s grabber mouth! Help him to blast away from the buggoid's sonic gun with his jet pack! Get to safety, then aim and fire the blasters to stop that swarming space critter! Includes 2 minifigures with weapons: alien buggoid and robot sidekick with a jet pack.</br></br>*Includes 2 minifigures with assorted weapons: alien buggoid and robot sidekick</br>*Features grabber mouth, opening cockpit, moving wings and poseable legs</br>*Also includes jet pack, alien sonic gun and a blaster</br>*Dodge the Space Swarmer's grabber mouth!</br>*Blast that bug!</br>*Dodge the beams of the alien sonic gun!</br>*Measures over 1" (4cm) high, 5" (14cm) long and 3" (10cm) widem) high, 5" (14cm) long and 3" (10cm) wide +
Theme
Galaxy Squad +
Title
Space Swarmer +
Type
Set +
USPrice
$11.99 +