70702 Warp Stinger is a 310 piece 2013 Galaxy Squad set. The set is predominately based for the Warp Stinger vehicle, with a cocoon trap, up against the smaller in comparison Red Team Galaxy Squad speeder, including three minifigures, a winged Alien Mosquitoid, Billy Starbeam, and his robot sidekick.

The Galaxy Squad speeder is mainly white, with flashes of red and grey. The base of the speeder is a red 2x4 plate, with two gold studs on one end, then a round plate in dark grey, placed in between the two parts. A red clip piece is used to hold up the gun placed at the front. The section consists of 3 pieces for each "blaster", including a transparent blue stud, a wheel axle piece, and a transparent blue cylinder on the end. Above that area is a cover piece, with two red rails on the side, which hold up the white wings. Both are covered in a sticker, one side with the Red Team's logo, and the other with the universal logo for the Galaxy Squad. A one-piece seat piece is used for driver's seat. At the back of the seat, is a split level plate, with two blue transparent studs as engine thrusters. A two one by two bricks, in light grey, holds up the main console of the ship. Two white clip pieces are used to grip the two guns, which can be taken off. The front of it features a cover piece, with a red line.

The majority of the set is the Warp Stinger, made up of lime green, dark red, and brick yellow pieces. The mouth of the Warp Stinger, at the front of the cockpit is made using several lime green arch pieces, with a tooth formation made up of dark red cheese slopes. The main screen, or the eyes of the Warp Stinger are dark red transparent cockpit screens. These are prominent in the Galaxy Squad line. Inside the head of the Warp Stinger, is a small area for the pilot. There are two sticker decals as controls for the ship, with room for Mosquitoid included in this set to seat. At the back of the head is a plane rudder, featuring sticker decals to add detail. A purple cocoon piece is placed at the end of the Warp Stinger's head. Made of four pieces, and spacious for a figure, and easily detachable from the head. On each sides there are two wings, all of which are in transparent lime green. The spinal area of the Warp Stinger is made of a repetitive build, which uses all three of the major colours of the set. The build for the spinal area has a pattern - every second rudder has a sticker detailing, and are not movable. But however, the non-printed ones do have slight maneuverability. The bottom of the Warp Stinger features the main play function of the set - a thornax launcher with a new purple-colored ball. The box art suggests it seems to have the ability of making a cocoon grow over the target, deployable by squeezing the pieces holding the ball.

The Warp Stinger is one of the many insect hybrid vehicles used by the aliens, known as one of the major vessels of their swarm. It was infamous throughout the galaxy for its cocoon trap, thornax blaster, and large wings. The Galaxy Squad vehicle, made for the Red Team, is one of their two known vehicles in the theme. It is piloted by Billy Starbeam, with assistance from his robot sidekick. 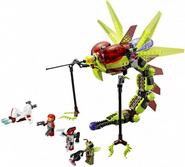 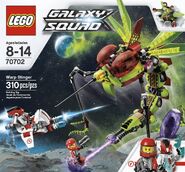 Billy Starbeam inside the cocoon.