The main feature of the set is a jet piloted by Kai. It is mainly red, and has a long nose, at the front of which are two large gold blades. The cockpit is fitted in the middle of the fighter, and is covered by a large translucent windscreen. On each side of the font of the cockpit is a large red flap with flame detailing stickered on, and behind the cockpit, situated on top of the fuselage, are two flick-fire gold-tipped missiles. At the back of the jet are the wings. Each are composed mostly of black and red plates, with some red tiles and a gold grill piece on the top of each wing. The wings are situated horizontally at an angle from the fuselage. Also at the back of the plane are two tilted vertically-standing red fins, and beneath each wing, also at an angle with the fuselage, is a large, square air vent, composted mostly of red basic bricks and square red tiles. The back of the plane also has some small green elements mixed into the structure.

Kai's fighter was once a Nindroid fighter plane, but was converted into it's current form by one of the Techno-Blades and re-purposed by Kai. Kai then used it in fights against the new mechanical menace faced by New Ninjago City. 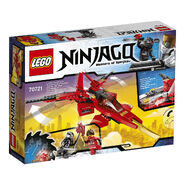 The set in its entirely
Add a photo to this gallery