In episode 32 - Codename: Arcturus, Kai used his prototype X-1 Ninja Charger vehicle and drove it to the highway to catch Nindroids in the convoy led by General Cryptor. First he fired rockets above the bridge out of the rocket launcher on vehicle's back. When Pythor saw that he sent Nindroids to destroy him. P.I.X.A.L. activated the built-in interceptor bike, but Kai wasn't able to control it so he hits the edge of the oil tank, and climbs up on it, but accidentally puts it on fire after using his spinjitzu. The X-1 machine, remotely driven by P.I.X.A.L. accidentally scrapes the oil tank so gas starts leaking. When the fire comes to the leaking tank, the whole tank explodes but Kai jumps off to Pythor's truck and saves himself. It's unknown what happens to X-1 after the explosion. 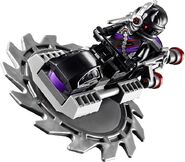 Nindroid flyer
Add a photo to this gallery