Brickipedia
Register
Don't have an account?
Sign In
Advertisement
in: Class 4 articles, Sets listed for ages 9-14, Ninjago,
and 3 more
English

70728 Battle for Ninjago City is a 1,223 piece Ninjago set released in 2014. It includes Jay, Lloyd Garmadon, Three Nindroids, Nya, The Overlord, and Zane.

In Ninjago: Masters of Spinjitzu this temple is named the 'Temple of Fortitude' that was left over from the battle between The Overlord and The First Spinjitzu Master's battle. It can generate a shield that is unaffected by Golden Powers. Inside are the armour suits from the Stone Warriors that the ninja used to gain new outfits and stay protected to some extent form the Golden Master's power. Cyrus Borg hid his shrinking pill inside the temple and gave it to ninjas so they can destroy Overlord's powers with that pill. 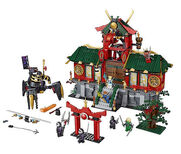