Brickipedia
Register
Don't have an account?
Sign In
Advertisement
in: Class 3 articles, Sets listed for ages 8-14, 2015 sets,
and 3 more
English

The City of Stiix, also known as the City on Water, is a location focused on the fifth season of Ninjago. It is a city that floats on wooden planks in the ocean. All the buildings are wooden as well. Ronin's pawn shop is located there, although it was destroyed during a battle between the Ninja and the ghosts. In the episode "Stiix and Stones", Soul Archer shot a ghost arrow at the entry sign of the city, turning the sign into a ghost. In "Curseworld, Part II", the majority of Stiix was destroyed, after the attack of the Preeminent.

Ronin's Pawn Shop is a small store located in Stiix. Like all buildings in Stiix, the shop is wooden and oriental style. The shop includes many valuable artifacts stolen by Ronin, including the Scroll of Airjitzu, the Blade Cup, and the Aeroblades. In "The Crooked Path" the shop is taken over by Morro and his ghosts, and is transformed into a ghost shop. 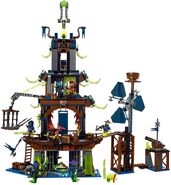 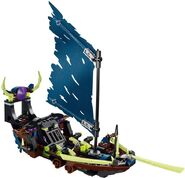