Brickipedia
Register
Don't have an account?
Sign In
Advertisement
in: Class 3 articles, Sets listed for ages 8-14, Ninjago,
and 3 more
English

The Ninja, Nya, and Sensei Wu boarded the Bounty 2.0 in Winds of Change in order to flee from Morro, who had possessed Lloyd and sought to obtain the staff of the The First Spinjitzu Master from Wu. Morro pursued the group atop his Morro Dragon, and caught up to the ship in Ghost Story only to leave when Wu hurled the staff overboard, having already copied the message engraved into it. This message served as a guide to the First Spinjitzu Master's tomb, which the Ninja then set out to reach before Morro. In Peak-a-Boo the Ninja and their allies used it to travel to the Wailing Alps, and it dropped Kai's Fire Mech, Cole's Earth Mech, Jay's ElectroMech, and Zane's Titan Mech off to begin their ascent to the summit. After monitoring the Ninja from aboard ship, their allies succeed in capturing Ghoultar and imprisoning him aboard the Bounty.

In Kingdom Come the crew of the Bounty-Wu, Misako, Nya, and Ronin-attempting to convince Ghoultar to reveal his plans and those of his allies. Ghoultar refused to talk, and in a private chat with Ronin reminded the mercenary of his debt to Soul Archer, with Ronin later aiding in Ghoultar's escape. Despite this, the Bounty was able to pick up the Ninja upon their return from the Cloud Kingdom and carry the Sword of Sanctuary back to Wu's tea shop. In The Crooked Path the Ninja use the Bounty to purse R.E.X., Ronin's airship, after he steals the Sword of Sanctuary, only to learn that the craft is a decoy. In Grave Danger the ship is used to travel to the Tomb of the First Spinjitzu Master, and becomes involved in a brief battle between the Ninja's allies, Soul Archer, and Bansha while the Ninja and Ghoultar seek the Realm Crystal. In Curseworld, Part I, the Ninja use the vessel to return to Steep Wisdom, where they rendezvous with Cyrus Borg.

In Infamous the Ninja train aboard the Bounty while seeking refuge from their newfound popularity. It's history with Captain Soto is revisited, and the ship is pursued by police after the Ninja are framed for various crimes by Nadakhan. In Enkrypted the ship appears in flashback, revisiting the final battle between Soto's crew and that of the Misfortune's Keep. In Misfortune Rising Kai and Zane attempt to break the Bounty out of an impound lot but fail, and the ship is later carried into the air by the power of Nadakhan's Djinn Blade.

In Day of the Departed, Wu uses the ship to travel to the ruins of the Monastery of Spinjitzu in order to celebrate the holiday and remember his father. Morro, having been brought back from the Departed Realm by the power of Sensei Yang, approaches Wu and later flies aboard the Bounty with him to reach the Ninja. Wu and his students-minus Cole, who is confronting Yang at the Temple of Airjitzu-then use the ship to travel to Yang's temple in an effort to stop the ghostly master. In The Hands of Time the Ninja use the ship to travel to the monastery after learning that Sensei Wu is battling Acronix, who recognizes the ship upon it's arrival. During The Attack, the Bounty is among the vehicles to be destroyed by the Vermillion as they attack the Temple of Airjitzu, which has become the base of the Ninja.

At some point following Lost in Time, the Bounty was rebuilt yet again into the Destiny's Bounty 3.0. 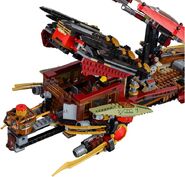 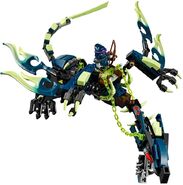 The Ghost Dragon in the TV Series