The set includes a Anacondrai helicopter with two rotors on the wings and one at the back. It has a snake head on the front that can fire a net. There is also a small flying vehicle for Skylor. 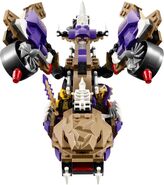 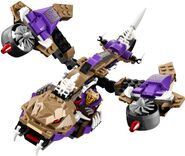 Skylor's rocket board
Add a photo to this gallery

Retrieved from "https://brickipedia.fandom.com/wiki/70746_Condrai_Copter_Attack?oldid=2002854"
Community content is available under CC-BY-SA unless otherwise noted.