Brickipedia
Register
Don't have an account?
Sign In
Advertisement
in: Class 3 articles, Sets listed for ages 7–14, Ninjago,
and 3 more
English

The set features a large temple with a snake head that shoots green balls and prison for Lloyd Garmadon.

The temple first appeared in Ninjago Season 4, as the fortress of Master Chen. It also served as lodging for the competitors of the contest and the competing area. It had an underground area which was used as a noodle factory, where the slaves (failed competitors) worked. 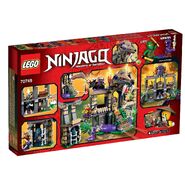 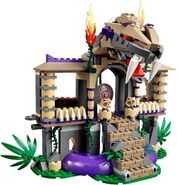 $59.99 +
Released
March 1, 2015 +
ShopDescription
Enter the Anacondrai Temple and rescue … Enter the Anacondrai Temple and rescue Jay!</br></br>Deep in the jungle, Jay is being held captive by the Anacondrai. Find your way to their temple with Lloyd’s map. Once you get there, beware – Kapau’rai is on guard with his Anacondrai Blade, and Zugu is armed with a crossbow. Do you dare to Enter the Serpent? There are traps everywhere, including hidden spring-loaded shooters in the stairs, poison balls dropping from the snake’s mouth and a trapdoor! Search the caves for a second map with directions through the Anacondrai Temple. Find your way across the suspension bridge to the prison tower and free Jay! Includes 5 minifigures with assorted weapons and accessories: Lloyd, Jay, Chen, Kapau’rai and Zugu.</br></br>*Includes 5 minifigures with assorted weapons and accessories: Lloyd, Jay, Chen, Kapau’rai and Zugu</br>*Anacondrai Temple features a snake head with opening mouth, huge fangs and poison ball-dropping function, 2 spring-loaded shooters in the stairs, gon-gong emblem, trapdoor and pit with spikes, hidden caves, spider web, map, weapon rack with spiked club, Chen’s fang claw and a stone blade, treasure chest, snake teeth details, skulls, bones and orange flame elements</br>*Detachable prison tower features a suspension bridge, bone gate and a prison</br>*Weapons include Lloyd’s 2 swords, Jay’s 2 sai, Kapau’rai’s Anacondrai Blade and Zugu’s crossbow</br>*Accessories include Chen’s magic staff and Lloyd’s torch and map</br>*Chen’s magic staff is all-new to LEGO® sets</br>*Dodge the poison balls from the snake’s mouth</br>*Press down the statues to activate the hidden spring-loaded shooters in the stairs!</br>*Look for treasure in the caves</br>*Dash across the suspension bridge</br>*Free Jay from the prison tower</br>*Recreate your favorite scenes from the NINJAGO Masters of Spinjitzu™ TV show</br>*Anacondrai Temple measures over 7” (20cm) high, 14” (38m) wide and 4” (12cm) deep</br>*Detachable prison tower measures over 5” (13cm) high, 4” (12cm) wide and 1” (5cm) deepcm) high, 4” (12cm) wide and 1” (5cm) deep +
Theme
Ninjago +
Title
Enter the Serpent +
Txt1
Jay +
Txt2
Lloyd Garmadon +
Txt3
Kapau'rai +
Txt4
Master Chen +
Txt5
Zugu +
Type
Set +
USPrice
$59.99 +
Advertisement