Brickipedia
Register
Don't have an account?
Sign In
Advertisement
in: Class 3 articles, Sets listed for ages 8–14, Ninjago,
and 3 more
English

The main part of this set is a red mobile ninja base with golden and black shields, driven by an unidentified blue robot. Kai has a small red bike and Nya a small flyer. There is also an Anacondrai gate included. 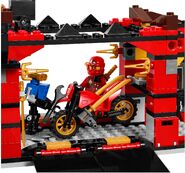 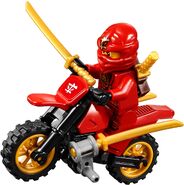