Brickipedia
Register
Don't have an account?
Sign In
Advertisement
in: Class 3 articles, Sets listed for ages 14+, Ninjago,
and 2 more
English

In "The Temple on Haunted Hill", the Temple of Airjitzu was said to be the monastery of Sensei Yang, the creator of Airjitzu. After his death, he and his students still lived on as ghosts, and the temple became a haunted house. The temple has a rule that whoever makes it in must escape before sunrise, or they will become a ghost, as this happened to Cole when the Ninja went there in order to learn Airjitzu. Tourists do visit outside the temple, though no one dares to go inside. The Temple of Airjitzu returned in Season 6, in the form of being incorporated into Djinjago by the Sky Pirates after being lifted into the air by the Djinn Blade.

In "Day of the Departed," the Temple is revealed to still be floating despite the events of season 6 being negated, and Cole traveled there in order to confront Yang for turning him into a ghost. However, this played right into Yang's hands, as he had intended to take advantage of the magical Yin-Yang Eclipse to effect his return to mortal form. After Cole's rash actions allowed Yang to revive several defeated enemies of the Ninja to attack them, Yang revealed that he had cursed himself, his students, and his temple after attempting to use the Yin Blade to achieve immortality. He then attempted to regain human form by opening the Rift of Return, but was defeated by Cole, which freed his students from his curse and allowed them to return to normal. After a change of heart, Yang gave up his own chance to pass through the rift so that Cole could do so, and remained as "Master of the House" to the now restored temple, which the Ninja then moved into as their new base.

In "The Hands of Time" Misako begins moving things into the Temple with help from Ronin while Dareth "supervises"; while there the trio sense a disturbance caused by one of the Time Blades. In "The Hatching" the ninja return to the temple and hear the story of the Time Twins, Acronix and Krux, and later depart to deal with the emergence of the Vermillion. In "A Time of Traitors" Lloyd returns to the temple to watch over an ailing Wu, and remains there during "Scavengers" when Wu confesses to Misako that he is rapidly aging. The episode also sees Lloyd attempt to keep his teammates from leaving when Ronin and Dareth arrive with word of the Vermillion, but later departing when Wu reminds him of the importance of teamwork.

In "The Attack" the Ninja return to the temple after recovering one of the Time Blades, only for it to be attacked by the Time Twins and their Vermillion forces. Despite the efforts of the Ninja and the appearance of the new Samurai X, they lose the Destiny's Bounty, the Time Blade, and Wu to the enemy. The Ninja later embark from the temple in "Secrets Discovered", with Lloyd departing aboard the Destiny's Shadow after Misako gives it to him and discloses Wu's condition.

The term Airjitzu refers to a martial art invented by Sensei Yang, which allows its user to achieve temporary flight. 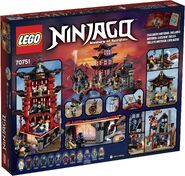 The back box art

The booklet included in the set 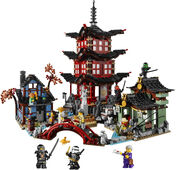 The temple's interior and features 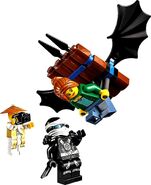 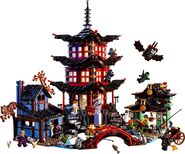 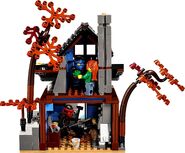 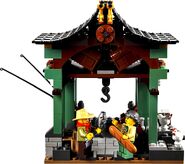 Cole on a firework cart 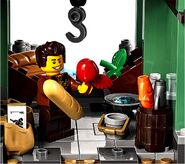 Dareth in the grocery shop 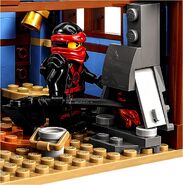 The statue of Sensei Yang