Brickipedia
Register
Don't have an account?
Sign In
Advertisement
in: Class 3 articles, Sets listed for ages 7-14, BIONICLE,
and 2 more
English

"Lewa is a true daredevil, a cunning rogue whose foolhardy manners have often gotten him into trouble. His rebel approach is a double-edged sword that the other heroes both love and hate. On one hand, Lewa finds new ways, on the other these ways sometimes lead to new trouble!"
―BIONICLE.LEGO.com

70784 Lewa – Master of Jungle is a BIONICLE set that was released in January 2015. It also features a dark blue Skull Spider. This set contains 85 pieces.

Lewa was one of the six Toa that landed on the island of Okoto. He was the Toa of Jungle, and mainly resided in jungle areas. Upon arrival, they proceeded to find the local Protectors, whom taught them the basics of protecting the island and told them about a powerful dark force threatening Okoto - Makuta, or at least his conscious. He was using a large Skull Army to do his bidding, and Lewa, along with the other Toa, set out to defeat them. They defeated the initial forces, but were forced to gain more power in order to defeat the more powerful opponents beyond.

Much like the other Toa he will be taller than standard Hero Factory figures due to the use of longer “skeleton” elements and friction joints. Also, like the other Toa, if you turn a small wheel on his back his arms will move. He has two large air axes, the blades of which detatch and attach to his arms to form jet-like wings (this is called his X-glider). When in this mode he can still use the axe handles as weapons as the axe handles are actually swords. He will also include a Mask of Jungle, a Golden Mask of Jungle and a blue Skull Spider. 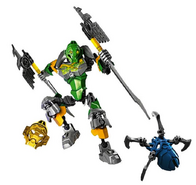 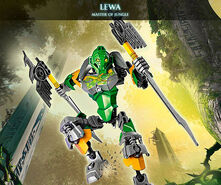 x12px 179.00 kr +
Released
January 2015 +
ShopDescription
Grab the Golden Jungle Mask with LEGO® BIO … Grab the Golden Jungle Mask with LEGO® BIONICLE® Lewa – Master of Jungle with convertible X-glider/battle axes and battle arm function.</br></br>Convert Lewa’s X-glider into 2 huge battle axes!</br></br>Match up against the evil Skull Spider with Lewa – Master of Jungle! Power up the dual-purpose X-glider to soar into the sky. When you spot the Skull Spider crawling from the ruins, swoop down to the ground and convert the X-glider into 2 massive battle axes. Prevent the thieving creature popping off Lewa’s mask using the 2 swords and turn the wheel to power up Lewa’s bashing battle arm. You must fight hard to protect the precious Golden Jungle Mask from the forces of evil.</br></br>*Features a BIONICLE® head with mask and mask pop-off trigger, 2 BIONICLE shells, tribal chest decoration, convertible X-glider/battle axes, 2 swords, wheel-operated bashing battle arm function and posable joints</br>*Also includes the Golden Jungle Mask and a dark blue Skull Spider</br>*Fly high with the convertible X-glider</br>*Transform the X-glider into 2 giant battle axes</br>*Turn the wheel to power up the bashing battle arm</br>*Don't let the Skull Spider pop off Lewa’s mask!</br>*Battle for the Golden Jungle Mask</br>*Highly posable and durable for intense action play</br>*Combine with 70778 LEGO® BIONICLE® Protector of Jungle using building instructions available at LEGO.com/BIONICLE to power up for ultra elemental battle!</br>*Stands over 7” (20cm) tallmental battle!
Theme
BIONICLE +
Title
Lewa – Master of Jungle +
Type
Set +
USPrice
$14.99 +
Advertisement