"Onua is grounded and wise. He likes to spend his time alone meditating under the stars. Like an underground cave, receptive and silent. And… Snoring! Though Onua rarely says a word, the other heroes have come to respect this sleepy giant. They know that when he speaks, his crude voice caries guidance and wisdom."
―BIONICLE.LEGO.com

70789 Onua – Master of Earth is a BIONICLE set released in January 2015. It features an Onua figure, a pale-yellow Skull Spider, and a Golden Mask of Earth. This set contains 108 pieces. 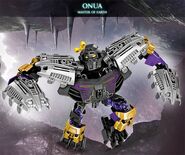 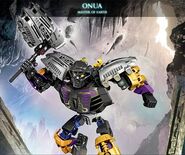 Retrieved from "https://brickipedia.fandom.com/wiki/70789_Onua_%E2%80%93_Master_of_Earth?oldid=1721454"
Community content is available under CC-BY-SA unless otherwise noted.