Brickipedia
Register
Don't have an account?
Sign In
Advertisement
in: Class 2 articles, Sets listed for ages 6-12, Castle (2007),
and 3 more
English

7078 King's Battle Chariot is a Castle (2007) set that was released in May 2009. The set includes 103 pieces to construct a battle chariot, a treasure chest, and four minifigures.

The main part of the set is the battle chariot. This has two large brown wheels at either side and is pulled by a horse. Two pikes are pointing out from the body to shop the horse from going a very wide turn. At the front of the body is a dark blue semi-circled wall with a crossbow at the front. Two small dark blue walls with brown sloped bricks and flags on the top go behind the semi-circle wall. At the back of the chariot is a raised platform with a low golden wall and a golden treasure chest. The chariot has room for several minifigures inside.

The set includes four minifigures: The Crown King with a golden sword, a Crown Knight with a pike and a round helmet, and two Troll Warriors with a shield and a spear each. 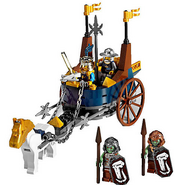 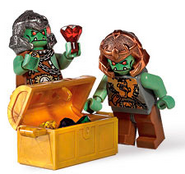 x12px $39.99 +
Released
May 2009 +
ShopDescription
The King rides into battle aboard his r … The King rides into battle aboard his royal chariot!<br />Evil trolls are attacking, and the knights need help! With banners waving high and his best royal guard by his side, the King charges onto the battlefield in his crossbow-equipped battle chariot. Now that the king is here, those villains don’t stand a chance!* Includes horse and 4 minifigures: The Good King, knight and 2 trolls!* Each minifigure comes with medieval accessories, even the horse has a helmet!* Battle chariot is equipped with cross bow, spears and banners flying high!* Horse and chariot measure over 9 inches (22.9cm) in length! measure over 9 inches (22.9cm) in length! +
Theme
Castle +
Title
King's Battle Chariot +
Txt1
Troll Warrior +
Txt2
Troll Warrior +
Txt3
Crown King +
Txt4
Crown Knight +
Type
Set +
USPrice
$19.99 +
Advertisement