70791 Skull Warrior is a 102 piece BIONICLE set that was released in summer 2015. It includes a Skull Warrior and Kopaka’s Golden Mask of Ice, which is being drained of its power.

The Skull warriors work for Makuta and Skull Grinder. They have to primary weapons; A six shooter Bow and jagged spear. In the Lego.com cartoon the Warriors ambushed the Toa in the city of the Mask Makers. They would almost have defeated the Heroes, but Lewa flew in and smashed away the archers. Although it appeared in the Set, The skull warriors never took Kopaka's golden Mask in the Show. 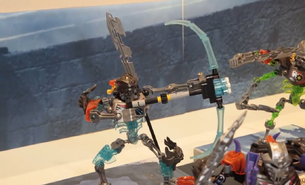 Retrieved from "https://brickipedia.fandom.com/wiki/70791_Skull_Warrior?oldid=1910656"
Community content is available under CC-BY-SA unless otherwise noted.