70810 MetalBeard's Sea Cow is a set in the LEGO Movie theme. The set was released on February 2014 to LEGO VIP Members only, and the set will be released in the general public on March 2014. 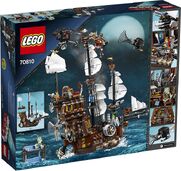 The back side of the ship

Inside of the ship