Oh No! Lord Business’ Robo Police have invaded Cloud Cuckoo Land in their high-tech Dropship and are in hot pursuit of Emmet, Batman, Green Ninja and Johnny Thunder! With a pair of Robo SWATs at the controls in the dual cockpit, fire up the rocket boosters for lift-off. Once airborne, turn the rear control to rotate the boosters and surge forward in fly mode. Fire the stud blasters and target the heroes with the rotating front cannons and rooftop rifle. Open the sliding side panels to access the weapon rack and extend the zip line to lower the Robo SWATs to the ground. Make a smooth landing and then try to capture Emmet and co in the Dropship’s removable prison. Includes 8 minifigures with weapons and accessories: Emmet, Batman, Green Ninja, Johnny Thunder and 4 Robo SWATs. 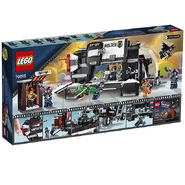