70902 Catwoman Catcycle Chase is a The LEGO Batman Movie set released in January 2017. The titular catcycle is present as an oversized, low-slung gray and purple motorcycle. Also provided is a small jewelry store facade, on a plate with a green container and a street lamp. Minifigures include Catwoman, Batgirl, and Robin. 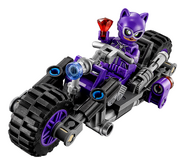 Without rider.
Add a photo to this gallery