Brickipedia
Register
Don't have an account?
Sign In
Advertisement
in: Class 2 articles, Sets listed for ages 6-12, 2007 sets,
and 3 more

7090 Crossbow Attack is a Castle (2007) set released in 2007. It includes a Skeleton Warrior on a Skeletal Horse, two Crown Knights, and a Crossbow Cart.

The main part of this set is the crossbow cart. The rest of the set consists of a skeleton horse, a Skeleton Warrior and two Crown Knights. The skeleton is equipped with a scythe blade sword and a shield and one of the knights has an axe. The other is unarmed.

The main function of the cart is a firing two black two-brick missiles. The trigger at the back can be pulled and then fire with a red rubber band, launching the missile with the impact. The missile is made of a 4-stud axle and a ball joint ball. The cart can be pulled along by two handles at the back of the cart, and driven on two brown wheels. Two silver crossbows are placed at the front for a special affect.

In the 2007 story of Castle (2007), the evil wizard raised a skeleton army to fight against the Crown King. The box art of the set depicts the crown knights guarding a short, narrow rock boarder bridge against a skeleton warrior on a skeleton horse. 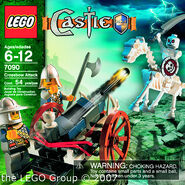 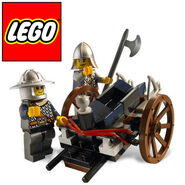 The set with LEGO logo

One of the crown knights ready to fire the cart