Brickipedia
Register
Don't have an account?
Sign In
Advertisement
in: Class 2 articles, Sets listed for ages 12-16, The LEGO Batman Movie,
and 2 more
English

The set includes Batman, Robin, Barbara Gordon, Aaron Cash, and two police officers, as well as Dr. Harleen Quinzel; inmates include The Joker, Poison Ivy, The Riddler, Catwoman, and Two-Face, all in orange jumpsuit attire. The main structure is a brown and gray building with a black, snow-covered roof. Layout consists of a main hall and two wings coming off of it, each containing glass-covered cells. The left wing also contains a laundry room and an office on its upper floor. The right wing has a visiting room and space to place accessories. A watchtower is included but does not connect to the main building. Also present is a medium-blue and white squad car, as well of plenty of accessories, including a walk-through metal detector, a table, a stocked cafeteria bar, chairs, drawers, chests, a computer, a weight bench, TNT crates, a broom, and a variety of different foodstuffs, among other hand-held objects. 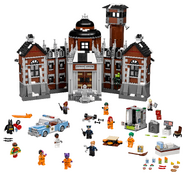 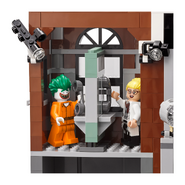 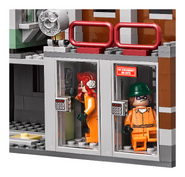 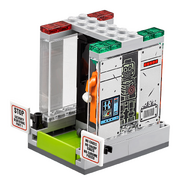