Brickipedia
Register
Don't have an account?
Sign In
Advertisement
in: Class 3 articles, Sets listed for ages 8-14, The LEGO Batman Movie,
and 2 more
English

The LEGO Batman Movie
70915 Two-Face Double Demolition is a The LEGO Batman Movie set in the theme released in June 2017. It includes Batman, Two-Face, and two Gotham City police officers. Two-Face has a bulldozer with two distinct styles, split down the middle- one side plain and the other modified with spikes, grating, tubing, and a six-stud shooter. Batman has a motorcycle dubbed the "Bat Hawk"- a two-wheeler with an enclosed cockpit and two stud shooters on each side. Two pieces of cautionary fencing (complete with lights) are also present, as is extra ammo. 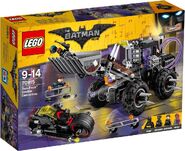