Brickipedia
Register
Don't have an account?
Sign In
Advertisement
in: Class 3 articles, Sets listed for ages 9-14, The LEGO Batman Movie,
and 2 more
English

It includes Batman, Robin, and an exclusive Harley Quinn variant figure with hammer. The centerpiece of the set is the Batwing, here given the inscription "Black Thunder", which features multiple launchers, rotating wings, an opening cockpit, and a back hatch which releases a small buggy when opened. Also included is a six-stud shooter cannon for Harley Quinn, as well as extra projectiles. 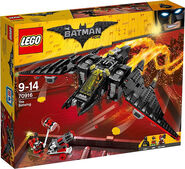