Brickipedia
Register
Don't have an account?
Sign In
Advertisement
in: Class 2 articles, Sets listed for ages 7-12, 2007 sets,
and 3 more
English

At the front of the castle are two towers. At the bottom of these are a large rock piece, which above is a octagon tower. On top of this is a platform encircled with battlements. On each of the towers is a small catapult at the back and a large crown shield at the front. The two towers are connected together by the main gateway. This has a drawbridge that can open and close, and a portcullis that can open and shut. Above the archway that connects the towers together is a shield and some decorated battlements.

The two side walls are different. In the middle of the right is a rock piece and a semi-cirlce or battlements coming out, with a large catapult in the middle. The other wall has a break-in section.

At the far back left corner is a prison supported on four poles. Above this is a platform with battlements encircling it apart from a space for a bridge to the main tower.

At the far back of the castle is a pair of black doors. Above this supported on two dark blue pillars is a platform encircled with battlements. In the middle of the platform is the King's throne. Above the throne is a wall that has another platform above it. On the right this connects onto the prison tower, and on the left is another tower on a ledge. In the middle is a treasure chest. Four posts on this support another platform encircled with battlements. 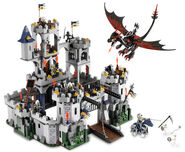 A knight in a tower 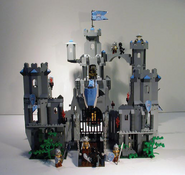 The original prototype of the set 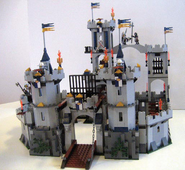