Brickipedia
Register
Don't have an account?
Sign In
Advertisement
in: Class 4 articles, Sets listed for ages 7-14, 2009 sets,
and 3 more
English

7097 Trolls' Mountain Fortress is a Castle set released in 2009. The set was originally scheduled to be released in August, but was instead released in May. 844 pieces and ten minifigures are included.

The original prototype of the Trolls' Mountain Fortress. 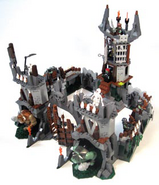 The second prototype - the third version was the official one.