Brickipedia
Register
Don't have an account?
Sign In
Advertisement
in: Class 3 articles, Sets listed for ages 6–16, BIONICLE,
and 4 more
English

7116 Tahu contains 19 pieces to build the character Tahu from 2010. He wields a flame sword similar to that of 8985 Ackar. He wears the red Kanohi Hau, the Mask of Shielding. The last piece is a golden Kanohi Hau, a part of the golden armour. Tahu has been released several times, including this incarnation. Tahu is meant to wear the collectable Golden Armour.

The Toa of Fire, Tahu is destined to wear the powerful golden armor and strike a blow for the freedom of two worlds. One of the six original Toa, Tahu has led his team of protectors ever since awakening in a pod off the shore of Mata Nui island. His fiery personality and impulsive tendencies have been tempered by time and experience. His leadership has helped save the lives of Matoran and Toa, and through many incarnations he has always faced up to the challenges facing him. His appearance and abilities were changed into that of a Toa Nuva when he and his team were immersed in energized protodermis, and then again for his mission in Karda Nui, where flight was necessary to complete his mission of opening the Codrex. Now, the Mask of Life has transformed him back to his original appearance so he can use the incredible power of the mysterious golden armor. He must wrestle the six pieces back from his enemies. 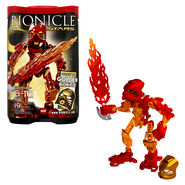 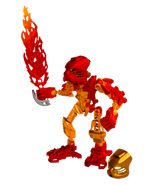