7126 Battle Droid Carrier is a Episode I: The Phantom Menace set released in 2001. This set includes six Battle Droids and one Pilot Battle Droid minifigures, the variation being exclusive to this set. The rack which carried the battle droids was the same as the one that came with the 7184 Trade Federation MTT and had the ability to slide out of the back.

At the front, there is a brown foot, with hinges at the side of it. Then there are two grey gun backs. There are two sloping brown bricks that extend off of the craft sideways, with grey beams that the droids put their heads on. Under that are three brown sloping pieces, each between a disc. Just to the side of the beams there are six guns: three on each side. Behind that, there are six battle droids in a crate. Above that area are four light grey short flag poles.

Battle Droid Carriers were designed by Baktoid Armor Workshop and Haor Chall Engineering to be used in large-scale battles, such as the invasion of Naboo. They were used to transport Battle Droids to wherever they were required on a planet. They were also used on a variety of fronts during the clone wars, including Kashyyyk. 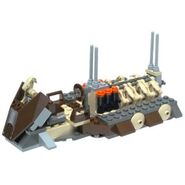