7131 Anakin's Podracer is a Star Wars Episode I: The Phantom Menace set released in 1999. The set contains Anakin Skywalker's podracer and a flagpole, as well as three minifigures.

Anakin's Podracer is mainly blue, beige (signifying sand), and grey, with the yellow engine fans at the front of the engines. A beam of beige bricks connect the cab and the engines, the cockpit being a little higher than the Podracer's front. The engines themselves are narrow, made principally of a dark grey engine piece, with transparent orange beams (signifying energy) running from each engine to the beige beam that holds the model together. The three yellow pieces on the front of the engine are also used in most of the other sets with Anakin's pod racer, excepting the set 7159 Podracer Bucket.

The flagpole is made of a lance, two flags, one yellow and one blue, a 2x1 brick with a clip, and a small 2x2 base.

Two standard minifigures are included: Padmé Naberrie and Anakin Skywalker. Padmé wears her Tatooine outfit with a blue top and black legs, in addition to her brown hair. Anakin Skywalker wears a beige outfit and a light grey helmet with dark grey goggles. The third minifigure, a Pit Droid, is brick-built, its main colours being brown, grey and white. Unlike in the film, this Pit Droid is as large as a regular minifigure.

This podracer was constructed and raced by Anakin in Episode I: The Phantom Menace, defeating all the other contestants of the Mos Espa Podrace. It was damaged in the race, however, by Sebulba crashing into it, and Anakin and Qui-Gon Jinn later sold it. 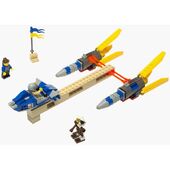 The set
Add a photo to this gallery