Batman fans can broaden their LEGO Dimensions with Excalibur Batman from The LEGO Batman Movie. The Fun Pack comes with a buildable Batman minifigure and a 3-in-1 buildable Bionic Steed which can be rebuilt into the Bat-Raptor and Ultrabat for additional in-game abilities. Players can use Batman’s Master Builder and Sword Switching abilities to solve puzzles and take down enemies. Batman also provides access to The LEGO Batman Movie Adventure World and Battle Arena. The Excalibur Batman Fun Pack will release in North America first at Target. 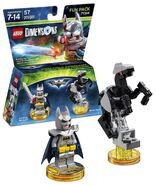