The set contains 21 pieces to build Toa Takanuva. He wears the silver Kanohi Avokhii, Mask of Light, and he carries two twin light staffs. The last piece of this set is a piece of the golden armour, the chest armour.

Takanuva was once Takua, a Matoran of Light in Karda Nui, before going undercover on the island of Mata Nui. He was the first Chronicler, following around various Toa and recording their adventures. He managed to get into quite a few of his own adventures, until he found a special Kanohi mask: the Mask of Light. While he and his friend Jaller, captain of the Ta-Koro guard and later a mighty Toa, searched for the rightful wearer of the Mask of Light, they battled Rahkshi and other menaces. Eventually, Takua realized he was the rightful wearer of the mask, so he put it on and became Takanuva, Toa of Light. Ever since, he has been helping the other Toa protect the Matoran workers, and fighting back against evil Makuta. Now, on the surface of Bara Magna, Takanuva helps Tahu and Gresh recover the scattered pieces of the golden armour. 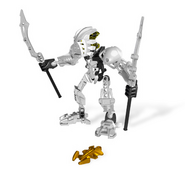 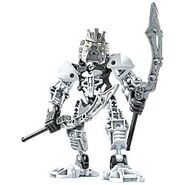 Retrieved from "https://brickipedia.fandom.com/wiki/7135_Takanuva?oldid=1968415"
Community content is available under CC-BY-SA unless otherwise noted.