Brickipedia
Register
Don't have an account?
Sign In
Advertisement
in: Class 3 articles, Sets listed for ages 7+, 2020 sets,
and 3 more
English

Banzai Bills are a larger variety of Bullet Bills that first appear in Super Mario World. Their attack pattern usually consists of shooting from off-screen (though occasionally, players can see them being fired from Banzai Bill Cannons) where a firing sound is played to alert players that they are incoming, and they travel toward players in a straight line. To avoid them, players can either jump on higher platforms or duck in lower areas of the stage. As with all Bullet Bill varieties, jumping on them or using a star on them are the only ways to defeat them, as they are immune to fireballs and break out very quickly if they are frozen with ice balls. While Banzai Bills share the same black coloration and physical characteristics as Bullet Bills, Banzai Bills lack arms and have a mouth in the form of a shark smile. They are the second-largest derived species of Bullet Bills, after the King Bill. The word "banzai" is a Japanese interjection mainly used for jubilation or celebration, frequently translated as "Hooray!"

The terrain is uneven, as some of the 4×4 grassy nodes are supported by earthy bricks, one with only a single layer of them and another with multiple layers. The latter node is, by default, followed by two more 4×4 nodes ordered from highest to lowest, one of which sometimes supports a Shy Guy. A small tree is intended to occupy one of these spaces, but is on the highest by default. The largest green node is at the ground level and usually lies opposite to the three 4×4 nodes. It is intended by default to carry a Super Mushroom sitting on a brownish block, but trading their place with the Shy Guy’s is welcome. The rest of the ground level consists of blue plates representing water.

At the water’s centre lies a brownish swing bridge with one brownish node on both ends, one which has studs to support Mario and a studless one that is harder to use but offers more coins. Both nodes have a grey gear underneath them, which will interlock with those in the structure opposite to the bridge. Scanning either of the action tiles on these nodes plays a dramatic song from Super Mario Bros. and puts a determined look in Mario’s eyes, because opposite to the bridge is a stack of two more grey cogs holding a pole that is holding two transparent suspenders, both of which carry a Banzai Bill. The default objective is to safely spin Mario on the platform as fast as possible until the dramatic song stops, which is challenging because completely rotating the bridge will also spin the Banzai Bills in a circle formation, potentially either obstructing or knocking Mario off of the bridge. 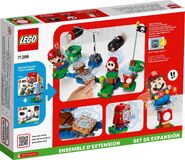 44,900 원</span></span>link= 44,900 원 +
Released
August 1, 2020 +
ShopDescription
LEGO® Super Mario™ fans can take on a fast … LEGO® Super Mario™ fans can take on a fast-spinning challenge with this Boomer Bill Barrage Expansion Set (71366). A great gift for kids to add to their LEGO Super Mario Starter Course (71360), this collectible toy playset features a spinner with 2 ‘flying’ Boomer Bill figures and a rotating platform with 2 difficulty levels (with or without studs). An enemy Shy Guy figure and a Super Mushroom boost the gameplay options.Fun app<br>The free LEGO Super Mario app has intuitive Instructions PLUS, featuring cool viewing tools to make building easier and even more fun. It also suggests different ways to rebuild and play, and is a safe environment for kids to share ideas with other Mario fans.Competitive action<br>Inspirational LEGO Super Mario playsets bring a family-favorite character into the real world. The Starter Course, Expansion Sets and Power-Up Packs allow fans to build their own levels and then try to master them in competitions with friends and family or solo gameplay.*Kids will love the fast-spinning, coin-collecting challenge they can create with this Boomer Bill Barrage Expansion Set (71366), bringing extra action to their LEGO® Super Mario™ Adventures with Mario Starter Course.*This unique toy playset features a spinning platform for LEGO® Mario™ (figure not included), a spinner with 2 ‘flying’ Boomer Bill figures, plus a Shy Guy figure and a Super Mushroom to boost the gameplay.*Players place LEGO® Mario™ (figure not included) on the platform’s studded end or the smooth end for added difficulty. How many times can they spin LEGO Mario without him falling or being knocked off by the Boomer Bills?*This 132-piece, creative LEGO® toy makes a fun birthday or holiday gift for kids aged 7 and up, inspiring kids to customize their own unique levels to add to their Adventures with Mario Starter Course (71360).*Measuring over 4.5” (11.5cm) high, 9” (24cm) wide and 7.5” (20cm) deep in its basic formation, this modular playset can be rebuilt and combined with the Starter Course and other Expansion Sets in many ways.*This Expansion Set doesn’t need batteries – combine it with the LEGO® Mario™ figure in the Starter Course to power up the gameplay experience.*Kids can find building instructions, cool digital viewing tools and inspiration for ways to play on the free LEGO® Super Mario™ app. For a list of compatible Android and iOS devices, visit LEGO.com/devicecheck.*Creative LEGO® Super Mario™ toy building sets bring a family-favorite character into the real world. They allow fans to expand and rebuild to create unlimited challenges to master solo or with friends and family.*No need for a Super Star’s power to connect or pull apart LEGO® bricks! They meet the highest industry standards to ensure a perfect, easy connection every time and robust builds.*LEGO® building bricks and pieces are tested in almost every way imaginable so you can be assured that this collectible toy playset meets the highest safety and quality standards. the highest safety and quality standards.
Theme
Super Mario +
Title
Boomer Bill Barrage Expansion Set +
Txt1
Banzai Bill +
Txt2
Shy Guy +
Type
Set +
USPrice
$29.99 +
Advertisement