The Mario Bros.' House, also known as Mario's House or Mario's Pad, is a modest, cozy house inhabited by Mario and Luigi. Though its appearances are mostly found in earlier, more obscure games and installments, it does make occasional appearances in the modern-day series in games such as Paper Mario: Color Splash. Throughout the games, the layout as well as the location of the house seems to change, although it always provides a minor role in the storyline, particularly the prologue. The house can actually be explored in Mario & Luigi: Superstar Saga and Mario & Luigi: Superstar Saga + Bowser's Minions, in which it contains a bathroom, upstairs bedroom, and kitchen. More often than not, however, the house has one room, a living area, with the interior seldom explored.

The terrain, almost all of which is grassy, is mostly level and consists of five nodes connected by four plates. Mario’s house is based on the one from the Paper Mario subseries: an orange-walled structure with two sloping red roofs, a grey chimney emitting a cloud, a brown base and a wooden door complete with a grey lock, and a brownish doorstep. There is a round tile with ‘MARIO’ printed on it in red, hanging above the door, and a red mailbox, white fence, and arrow sign accompany the house outside. Nevertheless, Mario can open up the roof by simply stepping on the lower ends of the slopes, revealing a Star Block for him. The side-builds are a green node for a Goomba, another for Yoshi, and finally a hammock that attaches to a tree.

Yoshi’s action tile goes on the ground (rather than the head or back), and Mario can scan it to say ‘Hello (again)!’ or ‘It’s-a me!’ to Yoshi and collect a couple coins. The hammock hangs above a grey plate and is a striped, yellow and white cloth that attaches to four grey TECHNIC bulbs, the first two which go with the tree and the other two which go with a grassy knoll. The knoll has a stump that can rotate halfway, thereby rocking the hammock and putting Mario asleep if he is lying in it and not in the middle of a round. Rotating the stump enough, Mario shall say ‘I’m a-tired’, slowly close his eyes and snore until somebody removes him from the hammock, awakening him.

Unlike most of the other standard Super Mario sets, there is no challenge central to this set, although there is a startled-looking Goomba that Mario can scan for a coin. When queried after a presentation, the LEGO Digital design lead on the Super Mario theme, Jonathan Bennink, commented:

"From the start, LEGO and the Nintendo team really wanted Mario to have a home. A place where he can get some naps in, in between all the running and jumping that he does. So, we have created Mario’s House. And in Mario’s house we have his best buddy Yoshi, who he can talk to, and get some coins from. There’s a little hammock here, beneath the tree, and you can slowly gently rock him to sleep. And of course, he can go into his little house as well."
―Jonathan Bennink 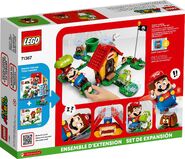 44,900 원</span></span>link= 44,900 원 +
Released
August 1, 2020 +
ShopDescription
Fans can enhance their LEGO® Super Mario™ … Fans can enhance their LEGO® Super Mario™ gameplay and enjoy lots of creative role-play fun with this Mario’s House & Yoshi Expansion Set (71367). This collectible toy playset features a buildable house with an opening door and roof with a Super Star Block underneath. A great gift for kids who have the Adventures with Mario Starter Course (71360), it also has a hammock to rock LEGO® Mario™ (figure not included) to sleep, plus Yoshi and Goomba toy figures to interact with and win coins.Awesome app<br>The free LEGO Super Mario app has cool viewing tools to help build this module, plus suggestions for creative ways to build and play, and it offers a safe platform for kids to share their creations.Top gift ideas<br>Inspirational LEGO Super Mario playsets bring a family-favorite character into the real world. The Starter Course, Expansion Sets and Power-Up Packs make fun LEGO gift toys for creative kids and all fans, who can create their own unique challenges, compete with friends or play solo.*Kids can earn digital coins for their next level and enjoy lots of role-play fun when they add this cute Mario’s House & Yoshi Expansion Set (71367) to their LEGO® Super Mario™ Adventures with Mario Starter Course (71360).*This collectible toy playset features a brick-built house with a Super Star Block under the opening roof, plus a hammock and Yoshi and Goomba figures for LEGO® Mario™ (figure not included) to interact with.*Rock LEGO® Mario™ (figure not included) to sleep on the hammock, make him talk by placing him on his friend Yoshi’s tag and defeat the Goomba… this Expansion Set offers various fun ways to enhance players’ gameplay.*This 205-piece, creative LEGO® building set makes a fun birthday or holiday gift toy for ages 6 and up, sparking kids’ imaginations to add a unique level to and customize their Adventures with Mario Starter Course.*This module measures over 5” (13cm) high, 10” (25cm) wide and 6.5” (17cm) deep in its basic formation, but can be reordered and combined with the Starter Course and other LEGO® Super Mario™ Expansion Sets in many ways.*No batteries needed for this creative building toy – it comes to life when combined with the LEGO® Mario™ figure in the Starter Course set. The set comes with clear instructions so youngsters can build confidently.*Kids can find digital building instructions, cool viewing tools and a safe platform to share their ideas on the free LEGO® Super Mario™ app. For a list of compatible Android and iOS devices, visit LEGO.com/devicecheck.*Collectible LEGO® Super Mario™ toy building sets bring an iconic character into the real world, offering fans a huge array of options to expand, rebuild, customize and create new challenges to master.*Ever since 1958, LEGO® bricks have met the highest industry standards. They are robust, connect perfectly and pull apart easily every time, so there’s no need for a Super Star’s power to build or rebuild!*LEGO® bricks and pieces are tested in almost every way imaginable, so you can be assured that this creative toy building set meets the highest safety and quality standards. the highest safety and quality standards.
Theme
Super Mario +
Title
Mario's House & Yoshi Expansion Set +
Txt1
Goomba +
Txt2
Yoshi +
Type
Set +
USPrice
$29.99 +
Advertisement